There are a few images related to dark matter shown at the home page. You’ll find more details about them below. Each image is accompanied with citation from the source webpage. Click on an image to learn more. 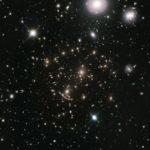 “This image shows a massive galaxy cluster embedded in the middle of a field of nearly 8,000 galaxies scattered across space and time. This “galaxies galore” snapshot is from a new Hubble Space Telescope survey to boldly expand its view by significantly enlarging the area covered around huge galaxy clusters previously photographed by Hubble. In this view the huge cluster Abell 370, located about 4 billion light-years away, lies in the center of this image. It contains several hundred galaxies. The mosaic of fields flanking the cluster contains myriad background galaxies flung across space and time. Massive galaxy clusters like Abell 370 are mainly composed of dark matter. Their large masses distort space, turning them into gravitational lenses that magnify and distort the light coming from distant background galaxies. The Frontier Fields program, a previous joint effort from NASA’s Great Observatories to study several clusters, allowed for the discovery of background galaxies and supernovas that are so distant and faint that they could not have been photographed by Hubble without the aid of this additional gravitational amplification.” 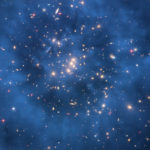 “This Hubble Space Telescope composite image shows a ghostly “ring” of dark matter in the galaxy cluster ZwCl 0024+1652. The ring-like structure is evident in the blue map of the cluster’s dark matter distribution. The map is superimposed on a Hubble image of the cluster. The ring is one of the strongest pieces of evidence to date for the existence of dark matter, an unknown substance that pervades the Universe. The map was derived from Hubble observations of how the gravity of the cluster ZwCl0024+1652 distorts the light of more distant galaxies, an optical illusion called gravitational lensing. Although astronomers cannot see dark matter, they can infer its existence by mapping the distorted shapes of the background galaxies. The mapping also shows how dark matter is distributed in the cluster. Astronomers suggest that the dark-matter ring was produced from a collision between two gigantic clusters. Dark matter makes up the bulk of the Universe’s material and is believed to make up the underlying structure of the cosmos. The Hubble observations were taken in November 2004 by the Advanced Camera for Surveys (ACS). Thanks to the exquisite resolution of the ACS, astronomers saw the detailed cobweb tracery of gravitational lensing in the cluster.” 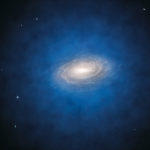 “This artist’s impression shows the Milky Way galaxy. The blue halo of material surrounding the galaxy indicates the expected distribution of the mysterious dark matter, which was first introduced by astronomers to explain the rotation properties of the galaxy and is now also an essential ingredient in current theories of the formation and evolution of galaxies. New measurements show that the amount of dark matter in a large region around the Sun is far smaller than predicted and have indicated that there is no significant dark matter at all in our neighbourhood.”